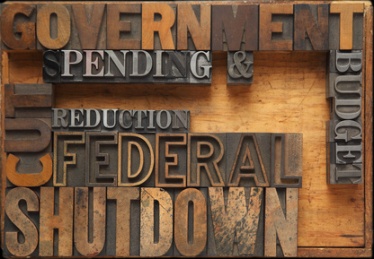 By now, you’ve probably figured out that you can’t visit Yosemite,  federal workers are on furlough, nine million women and children usually served by the WIC program can’t  get access to nutrition, and some random guy has taken it upon himself to mow the lawn at the Lincoln Memorial.

There are many words to describe the government shutdown (now in its 10th excruciating day), but the most fitting one that comes to mind involves a storm of excrement. Of course, the Twittersphere and ‘The Daily Show’ have taken a shining to #shutstorm and Shutstorm 2013 — and lately, I have too.

But the madness isn’t isolated to the government. The media coverage has also come under scrutiny, particularly for relying on loose language that confuses the issues. The result is a generally misinformed public about the root causes of the shutdown and what needs to happen to bring Shutstorm 2013 to an end. Here are a few sample offenders:

The problem is that the term Obamacare was actually coined by opponents of the law, but it’s become so ubiquitous that nearly every media outlet — from Fox News to NBC to NPR — has used it. (Thankfully, NPR recently announced that it will use the term ‘Obamacare’ less often.) Objective coverage of the shutdown starts with not using loaded terms.

Shutdown vs. Slimdown
“You know, paying federal employees for their work is a sign that our government is bloated. We need a slimdown” … said nobody ever. Well okay, Fox News seems to think the current crisis is basically a diet to help the government slim down.

This analogy is particularly offensive when you consider the millions of Americans in poverty (including children) who have lost access to food as a result of the shutdown. Fox has been rightfully shamed for this, but slimdown has still become the ubiquitous word of choice on their website for discussing the crisis.

Stalemate vs. Brinkmanship
The words you hear most often in the shutdown coverage are stalemate, gridlock, and standoff, which suggest two equally matched parties who can’t reach an agreement despite active negotiations. But what we’re actually witnessing is brinkmanship, or one party allowing a situation to become dangerous in order to get the results they want.

As John McCain observed, moderates in both parties are being held hostage by the extreme views of Tea Party Republicans. He even described their effort to defund the Affordable Care Act as a “fool’s errand.” In other words, this isn’t a stalemate or a negotiation — it’s hostage-taking.

The debt ceiling deadline is only a week away, and the U.S. government could default on its debt obligations for the first time ever.  The stakes are high. The words we use matter.