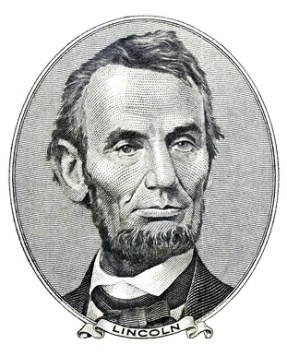 The mid-1800s were a colorful time for the American language, when quick-witted historical figures like Abraham Lincoln and Mark Twain roamed the earth. As American English separated from its mother tongue across the pond, our language seemed to change and grow as rapidly as the nation’s borders were expanding and other languages were making their way onto our shores (it was also a bit saltier back then, much like the pioneers who pushed their way westward).

As a result, it turns out some pretty strange insults – many of which we still use today in one form or another – come from the mid-1800s, particularly around the time of the Civil War. (Unfortunately, some of the most racist terms stem from that time period, too…) But it wasn’t our man Abe who won the dis wars in ‘Lincoln’ – it was Thaddeus Stevens, a powerful Republican leader in the House of Representatives under Lincoln, whose wit makes “Your momma” jokes seem like child’s play.

So, with a nod to Tony Kushner’s screenplay for ‘Lincoln,’ here are a few 19th century-style insults that would be worthy of retorts like “Burn!” or “Ooh, no he didn’t!” today:

1.)    You fatuous nincompoop! (21st century version: You smug idiot!)
This is my favorite insult uttered by Thaddeus Stevens in ‘Lincoln’ – it’s spoken with so much vitriol and sarcasm, he doesn’t need to use four-letter words to convey his contempt.

2.)    Why, you ignoble scalawag! (21st century version: You good for nothing low-life!)
Today, we think of a scalawag as a rascal. But the original definition of scalawag (c. 1848) is a white Southerner acting in support of reconstruction after the Civil War, often for private gain.

3.)    Ain’t that a heap of bunkum! (21st century version: What a pile of s@#t!)
We know it as bunk today. But bunkum dates back to 1845, often attributed to a congressman’s claim that an irrelevant speech he gave was only meant for the people of Buncombe, NC.

4.)    Enough of your palaver and carpet-bagging! (21st century version: I’m tired of your corrupt bulls#@t!)
Post-Civil War, carpetbaggers were Northerners who moved to the South for private gain – but history shows that while some were corrupt, others helped rebuild the Southern economy.

5.)    “I do not believe I could learn to like her except on a raft at sea with no other provisions in sight.” – Mark Twain on Lilian Aldrich (wife of poet Thomas Bailer Aldrich)
Mark Twain seemed to be friends with the Aldriches in the late 1800s, so it’s unclear what the context of this quote is. But it is clear that Mark Twain was a master of the witty insult.

Of course, if you’re not particular about whether your insults are American or British, you can always build your own 1800s insult using handy cheat-sheets like this one.

I was out of the country on November 6th this year (don’t worry, I voted by mail), which was an interesting experience. It turns out meeting people who are on the outside looking in at our election madness is a good way to get some perspective. I realized that this election season, we Americans were having a war over words.

Sure, the thick of the campaign season just felt like a cacophonous mess.  But looking back on the whole affair (which we can, now that it’s thankfully 10 days in the past), it seems clear that as a country, we were struggling to define the words that define us. It was, at times, an ugly struggle — but a meaningful one that showed us who we are and what we’re about.  It also proved that while words often evolve with the times to stay relevant in a new social context, some words are simply too powerful to be redefined.

So, lets take a look at three volatile words that, in my mind, were the most hotly contested leading up to this election season:

1.) Marriage: The definition of marriage has been shifting in this country for years now. But this year, it came to a head with marriage equality appearing on the ballot in four states. It was a historic victory for gay rights, with three states endorsing moves to allow gay marriage.  This one’s a clear win for an evolving definition of marriage. Just consider the fact that Merriam-Webster includes “being united to a person of the same sex” in its definition of marriage. Now it’s time for the Oxford English Dictionary to follow suit…

2.) American: Now, this shouldn’t be a difficult word to define. The OED says that an American is a “native or citizen of the United States” (Merriam-Webster agrees…) But for decades, politicians have tried to lay a claim on being more American than the opposition. Candidates must wear American flag lapel pins on TV, lest they be branded as un-American. President Obama saw the worst of this with the extremely disheartening Birther Movement — but it turns out, being white isn’t part of the definition for being American.

3.) Rape: For whatever reason, there were male Republican candidates this election who decided to take it upon themselves to try and redefine what constitutes rape. There was Todd Akin, who tried to come up with a definition for “legitimate rape.” And there was Richard Mourdock, who believes that sometimes, rape is just part of God’s plan (especially when it ends in pregnancy). Sorry, boys — the American electorate has spoken and your edits aren’t making it into the dictionary any time soon…

On the surface, these might seem like “just words” — but as this election has shown, words can be extremely charged and powerful. Thomas Friedman illustrates this eloquently in his op-ed about why he’s pro-life. The word has been co-opted by a religious movement and imbued with political meaning, but the reality is, the vast majority of humans respect life and are simply trying to live a good one themselves. So why all the fuss over words? Well, remember — how we define words defines us as a society.

As a Jersey girl by birth and a one-time resident of Lower Manhattan, the news of Hurricane Sandy hit me hard. Living on the west coast, it’s hard to imagine people navigating the Lower East Side by boat or entire boardwalks along the Jersey shore washed away into oblivion.

Now, as recovery begins, people are starting to ask questions. Are storms like Hurricane Sandy going to become the norm because of global warming? What was the storm trying to tell us about the places we inhabit and the way we inhabit them?

As the rivers surged and flooded into New York City, it brought to the surface an interesting fact unbeknownst to me — much of Lower Manhattan, which experienced some of the most dramatic flooding, is actually built on centuries’ worth of landfill. And with that realization, I began to understand that New York City’s downtown street names are trying to tell us something — they’re holding onto a piece of watery New York history:

The old shoreline of Manhattan was actually Pearl Street, supposedly named after all the oysters in the adjacent river. Most of the ground beyond that is landfill.

While the origins of the name Wall Street are somewhat disputed, popular accounts suggest the street was an actual wall that ran along the old shoreline (starting at Pearl).

Nearby, Canal Street is named after the actual canal that used to be there — it was dug to drain the filthy, diseased Collect Pond (which made the surrounding area even marshier).

And there’s the aptly named Water Street, which became the new shoreline of the East River when the island was extended through landfill in the 18th century.

It shows us that water has long flowed where we now build parks, condos and restaurants. — and for centuries, man has tried to keep it at bay, extending the shoreline of Manhattan. Now, it seems we’re witnessing a battle of man vs. nature as superstorms hit areas like New Jersey, which are typically known for being temperate. Mayor Bloomberg knows he has his work cut out for him if he wants to save the city we all love so much — perhaps his biggest hurdle will be convincing people, once and for all, that global warming is real.